You are Alice, welcome to Wonderland! You’ve chased the White Rabbit down the rabbit hole and, hooked by his promise of adventure, you enter his domain. This is what it can feel like to join social media as a business. Armed with Facebook, Instagram, Twitter and maybe even LinkedIn accounts, you are ready to discover all the possible leads that are rumoured to exist in Wonderland. What you aren’t ready for though, is the myriad of characters you’re about to meet, or how little time they have for what you want to say. You want followers and leads, but everyone you meet seems to have their own agenda. Their rules are mysterious and unspoken, and frankly, you’re over it before you’ve even started.

Social media marketing can be a minefield…

Just like Alice, you panic. The overwhelming choice is just like eating and drinking things that make you grow and shrink at random. Think of clickbait articles that promise things they never deliver, you don’t really know what it is, but it sure looks good. Business jargon is plentiful online, but it often sounds a little too much like a Tweedledum and Tweedledee story. When it’s over, you spend half an hour on Google learning new and seemingly useless terms. You’re not alone in this experience, which is why clarity is key. Be upfront with who you are and what you offer. There’s no benefit in wasting your time or your customer’s time. 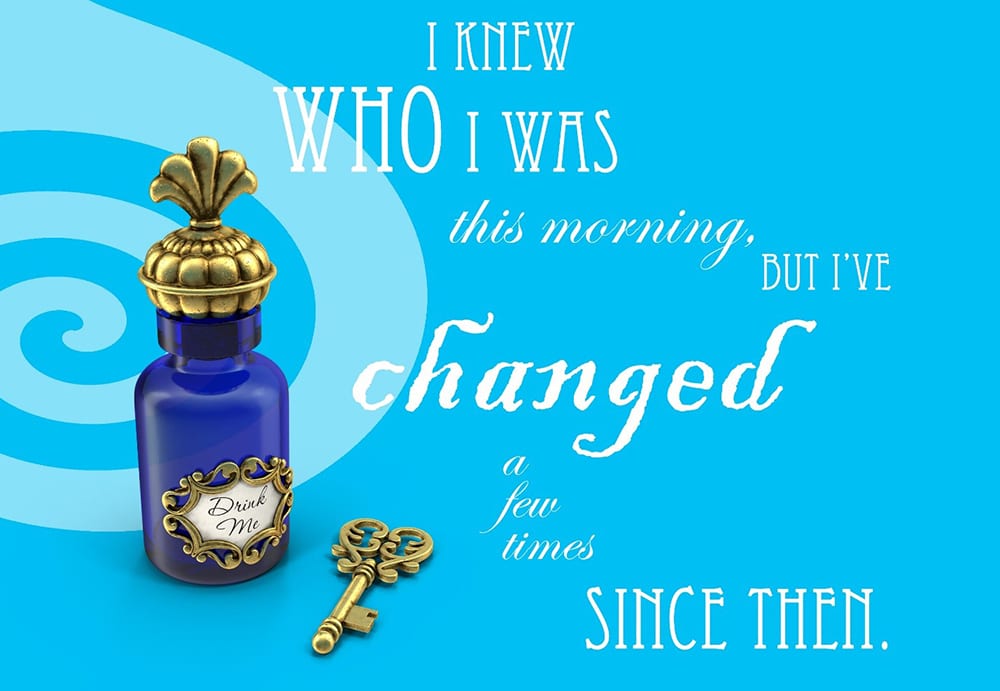 Unknowingly, you wander into a garden of talking flowers. They are a receptive bunch and have their own opinions. This is an established community. This is a real opportunity for Alice (or your business) to find a truly engaged audience. One example of such a community is Barista Exchange – pop along and take a look if you find yourself growing curiouser and curiouser, or you just really like coffee. 😉

Here experts, amateurs, and novices have a platform that is active and diverse. By tapping into a target audience such as this, you can create brand and individual awareness through genuine connections and conversation.

Alice makes a mistake though. She doesn’t work to identify herself from the very beginning and gets the boot because the flowers grow to believe that she is a weed. What often happens when a business joins an online community is that they lurk and self-promote without acknowledging the rules of the locals. For example, when you join a LinkedIn or Facebook group, your first interaction shouldn’t be a post asking for business. Instead, it should show that you are there to engage with other people, to learn and share knowledge.

Try being helpful in the comments section, earning a reputation as an expert in your field. Be generous with your time and show them who you are. There are, of course, potential customers littered throughout these communities and this is the point. Participating and being helpful will turn a mildly interested audience into actual business leads. Remember, these groups are filled with human beings and they appreciate being treated as such. Don’t get yourself kicked out of the garden because the only thing you provide is self-promotion. No one wants that person in the room, and the same is true online.

Have a clear brand voice…

By far the most important creature Alice meets is the Caterpillar. He asks the only question that matters in the long run: who are you? Alice can’t answer, so he transforms into a sassy butterfly and takes his “business” elsewhere. Knowing who you are online is essential. It gives you a base audience to work from, who are usually loyal and engaging, because they know what to expect from you.

Having a faceless Instagram or Twitter feed with zero personality isn’t going to win you any friends. You’ll mostly receive frustratingly unrelated questions, and people will unfollow as quickly as the Caterpillar loses patience with Alice’s mumbling replies. But luckily, it’s fairly easy to achieve a simple and effective social media presence.

Start by looking around you; look at your stock or service, your local area, flares of personality in the office, small things that convey a bit of character. How did you start your business and why? The answers may be complicated, but they usually have golden nuggets and sound bites that are perfect for social media channels. People respond best to people, not anonymous business profiles.

Every social network has its own rules…

In any community, conversation is valued a lot higher than shouting over people to be heard. Think of Alice leaving the Mad Hatter’s tea party. Frustrated, she runs away from them because they won’t listen to her, without even realising that she isn’t even speaking their language. They consistently interrupt her with what she perceives as nonsense, but maybe if she listened a little she would have learned to speak with them instead of at them. Similarly, Alice is deliberately obtuse when the Cheshire Cat informs her that she is asking the wrong questions.

This winding path of poor communication skills leads Alice all the way to the Queen of Hearts, who is always willing to misunderstand. Her Majesty’s maniacal behaviour is the extreme side of social media, with people shouting recklessly and ignoring everything but their own wants and needs. The Queen sentences Alice to death, which is what happens to many businesses in the world of social media.

So, social media marketing is not as straightforward as you may have thought! It’s true, organic reach is getting harder and harder to achieve, but if you are honest, open and communicate effectively, your social channels can be a beautiful, and free, source of information for potential customers. It can be fun too. Imagine if Alice had simply enjoyed her time at the tea party or told the flowers who she was from the beginning, we wouldn’t have needed a sequel.

So don’t be Alice, be better. Take a look at these examples of award-nominated communities.

Would you like to do more to promote your business online, but don’t have the time? Engage Content can help! Call us on 01 556 0576 for a quick chat about your social marketing needs.