Fake news: the phrase that gained so much popularity during the Trump vs Clinton 2016 presidential race. Of course, using fake stories to make financial or political gains is nothing new. But in today’s hyper-interconnected, digital world, the impact of such tactics is faster, more widespread and, very often, more convincing.

There are websites in existence which function solely to propagate false stories, with the aim of driving traffic to their hosted advertisements, thus making financial gains. Fake news usually spreads when the story plays on sympathies and prejudices that are currently in popular circulation.

It is the version of the world the reader already believes in and they are, therefore, satisfied when they come across a story bolstering this view – whether it is true or not. However, this is a simplified understanding of fake news and there is, in fact, many permutations to this phenomenon.

The many different faces of fake news

When a business publishes a blog, creates a video or posts an image on their social media, they have their fingers crossed in the hope it will go viral. Therefore, if the truth is not popular anymore then the only way some businesses can see to fulfil this goal is to skew the truth.

As Wardle has shown, there are many different variations of such a tactic and, therefore, while one fake marketing campaign may be viewed as sinister, another is enjoyed at satire. Let’s have a look at two such examples to get a clearer idea of this kind of marketing in action in the real world:

Does anyone remember Iron Mike? As a “fourteen-time world ironing champion” he decided to set up an ironing shop in Dublin, putting his bodybuilder physique to the task of saving the Irish people on energy by doing their ironing for them. His homemade style videos, with their corny graphics and cheesy one-liners, were a success with Irish people and everyone assumed business must be booming for Iron Mike.

However, Electric Ireland, in a later video, revealed it was, in fact, their own marketing campaign with Iron Mike revealing his great app, Electric Pal, that can help customers save on their energy bills. The campaign was feel-good, grabbed people’s attention and was cleverly executed.

The marketing campaign for the film A Cure for Wellness included the use of five false news websites in an attempt to replicate the film’s plot which centres around a fake wellness hospital. Made-up advertisements on the website included topics such as abortion, Donald Trump and vaccines.

Throughout, there were also advertisements for the film and hints about the film’s plot. Headlines included, “LEAKED: Lady Gaga Halftime Performance to Feature Muslim Tribute” and “Trump Refuses to Provide California Federal Support in Midst of Natural Disaster, Cites Sanctuary Cities”. When Buzzfeed published an article condemning the use of fake news for the sake of profit, Fox, instead of completely removing the websites, redirected anyone who clicked on the links to the official movie website.

Where to draw the line

Both these organisations used fake marketing tactics to advertise their product, but the difference is found in the outcome. It did not matter whether Iron Mike was real or fake, there was no negative outcome, apart from perhaps the disappointment of having to continue doing your own ironing! Fox, however, used fake news that was convincing, played on people’s emotions and constructed falsehoods about the world which would have directly affected people’s lives had they been true. After all, a lie is very much true for those who believe it.

Many people attribute the election of Trump to the US presidency as an example of just how far the consequences of fake news can go. This is debatable, considering the sheer number of people who chose to elect him, however there is evidence to support it. Initially, when it was suggested that Facebook had influenced the peoples’ vote due to the sharing of fake news stories across the online social community, Mark Zuckerberg shrugged it off as an outlandish assumption.

However, since then he has brought in many new measures to battle against fake news on the website. Facebook partnered with organisations that make it their business to fact-check stories being shared across the internet. Users of Facebook are now empowered to report a post as fake news so that these fact-checkers will be notified to review it. Algorithms have also been developed to scour the website of fake news more efficiently.

Facebook is not the only organisation taking a stand, Google also has brought in their own measures. Now, when you make a Google search you will see a ‘fact check’ tag beside stories, showing which of Google’s partner fact-checking organisations have verified the story.

This is a great step towards internet users gaining back some control over their world perspective. However, it takes time for fact-checkers to go through the whole of the internet – reviewing every blog post, every website, every article – while fake news manages to travel like wildfire. Putting the power into the hands of everyday internet users is helpful, and that is why there are now informative guides that can help people identify fake news, like this one from IFLA/FactCheck.org: 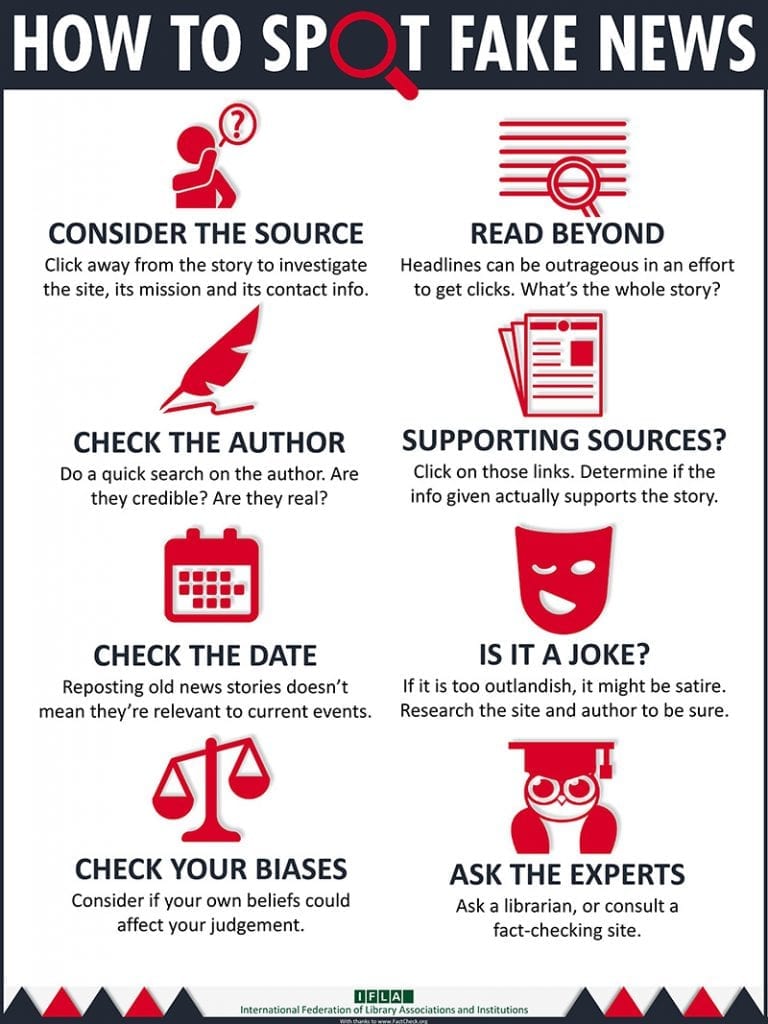 What do you think?

As a marketing company, we take the ethical choices we make when we create content or share content very seriously. At Engage Content, we always consider the effects our output will have and believe driving traffic should never come at the cost of damaging a business’s reputation with negatively misleading content.

However, as you can see from the examples above, fake news is not cut and dry. There are many variations of it and the outcomes can range from very serious to harmless fun. Do you know where you stand on the issue of fake news?

If you’d like help building fun, imaginative marketing campaigns that will boost your business in an authentic way, talk to Engage! Call us on 01 556 0576 to find out more!

Message us on Whatsapp