Tech Will Tell What Lies In Store For The Irish Language

Minority languages are set to meet their biggest challenge yet in today’s climate; and with the world becoming increasingly reliant on technology, English has been reinforced as the lingua franca. The majority of the technological infrastructure that dominates our world is provided through English, which certainly poses a threat towards minority languages.

That said, technology draws attention to minority languages, by allowing us to engage with a wider audience. We are now able to communicate with friends and family living hundreds of miles away through a common tongue, something that wasn’t possible 20 years ago.

The survival of the Irish language has always been something of an ongoing topic in the small little bubble that is Ireland, with people predicting its death on numerous occasions. Yet, somehow, the language has proved many a naysayer wrong, with Gaeilge (Irish) still being regularly taught and spoken in Ireland and abroad. The fact that there has been an influx of interest in the Irish language abroad is certainly food for thought and offers some serious encouragement for the survival of the language, now and into the future.

There is no denying that technology has helped broadcast the language, enabling it to develop that little bit further than expected. Although there is an abundance of passion and love for the Irish language, one cannot ignore those who resent the language. Can technology help rid us of the negative reputation that surrounds the Irish language? Is a fresh approach needed?

A lot of the resentment that surrounds the Irish language stems from the older generation of this country, and that is primarily down to how it was taught in schools. Learning a language shouldn’t be a chore, it should be something that is enjoyable and, most importantly, natural. The education system in Ireland 20 years ago certainly didn’t help to promote Irish, with the majority of the curriculum being focused on the written aspects of the language instead of the oral ones. Of course, writing is important, but being able to speak gives students extra confidence.

There are many people who reminisce about how they sat through Irish class in school, uninterested, bored and fed up. The foundations of the language were not being portrayed in a positive manner, with teachers often taking short-cuts and teaching their students by giving them the bare minimum to learn in the hope of it being enough to pass the exam. I’m by no means speaking about all Irish teachers, but there were enough like that to cause significant damage. The majority of people learning Irish struggled most with the actual mechanics of Irish and hopefully technology will develop a clear-cut solution to resolve this.

The Minister of State for Gaeltacht Affairs, Joe McHugh TD, recently opened the BIC (British-Irish Council) conference to discuss the promotion of indigenous, minority and lesser-used languages. The conference had two aims: to explore how advances in modern technology can best support these languages; and to provide an opportunity to share best practice and experience in this area.

This is something that could really prove very beneficial for the Irish language. For me, Irish is undergoing a transformation, and with the help of technology one can only imagine how it could be distributed on a wider scale. Interest has exploded in countries such as the US, Canada and Australia, with people reverting back towards their cultural heritage and giving the language a go for themselves. Smartphone apps and machine learning have assisted in helping people learn Irish, and it seems to be a breath of fresh air. NewScientist.com had this to say in relation to the advantages of smartphone apps:

Smartphone apps, it seems, can sometimes succeed where correspondence courses and evening classes so often fail: in teaching adults a new language. This success is in part due to apps’ tireless capacity for tuition, but it’s also because their design is informed by an improved understanding of how adults learn.

The role of technology

The production of games and app development is something that is clearly on the rise and with Gaeilge being a minority language, these new apps and inventions could be the incentive that people need to assist them in learning Irish, as well as other languages. Joe Romero’s Dangerous Dave again brings a fun side to learning Gaeilge, with an Irish version readily available. Joe expressed the importance of having Irish featured as an option on his game:

It was important to me to have an Irish version of the game, and it’s something I will continue to do with our games going forward. Games are increasingly being used to teach kids, and having games they can play in their own language, particularly Irish, reinforces its importance in culture. 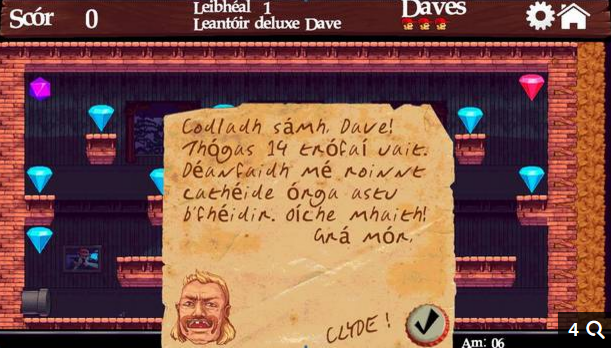 These games offer people a foundation in learning new languages, which can lead to further progress. With the right approach, combined with mutual interest, technology could be the next step in keeping minority languages alive. As long as people have Irish, they will continue to use it. The next step is encouraging people to speak the cúpla focal, and with the help of new technology that can be achieved.

And remember, beatha teanga í a labhairt (It’s the life of a language to speak it).

Are you interested in reaching out to audiences by using Irish in your online presence? We can help! Call us on 01 556 0576.